Although the debate on this matter rages on, it is not because of a lack of new data and evidence, as there is an abundance, and it all confirms the plasma cosmology models going back to the days of Hannes Alfvén, Swedish electrical engineer, plasma physicist and winner of the 1970 Nobel Prize in Physics for his work on magnetohydrodynamics (MHD).

There is a lot to say about this topic, with many great videos to be shared soon.

For now, this feature-length scientific documentary on the matter should act as a good primer, especially for those new to this subject who have not previously felt the need to question the dirty snowball hypothesis.

Symbols of an Alien Sky, Episode 3: The Electric Comet

Our mission is to present cutting edge, non-dogmatic science and reason, along with careful observations regarding this once in a dodeca-millenium event of the double-crossing of the elliptic plane of Panstarrs K2, what we believe to be the greatest Comet of the Ages. Identifying potential connections between Comet K2 and recent and current terrestrial weather and geologic events as well as space weather events of concern are vital to our understanding of future related events. We will prognosticate numerous potentially life-threatening scenarios that may soon begin unfolding in as little as 2 years, all based on varied known and accepted scientific principles and a few lessor understood as well. We will pursue these matters while also providing insight into successful strategies for survival on an individual and up to a societal level pending the realization of any of these identified biocidal scenarios. We also provide a forum here for further investigations and the connecting of dots related to this rare event in mankind’s true history and what strategies and technologies we can utilize to survive any harm that comes to bear. May this forum act as a coordination center and knowledge portal for such efforts. We will spearhead the effort to force governments worldwide into disclosure to their populaces of the true nature of the danger at hand and to then unite all nations in an effort to make this particular passing something humanity can one day be proud of.

The path of K2 in snapshots of its position, each one being 2 weeks apart, over its decades long serpentine course through our solar system. 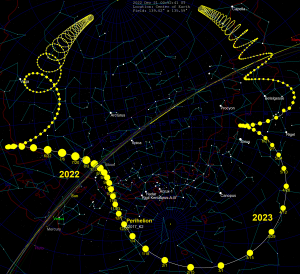